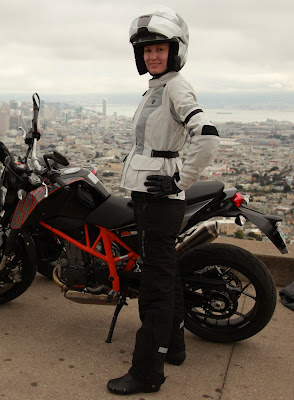 It's taken years, but I'm finally ready to embrace the white.  I've been averse to white my entire life.  I wear it; stains gravitate toward me like matter to a black hole.  I've been tempted by the idea that if I wore lighter colored gear, perhaps the heat index inside my jacket wouldn't rise to 115F in a stopped position.  I was eager to take a chance with the Levante, and though I've had the jacket and remained mostly silent for the past few months, the real driver to my silence has been the anticipation of HEAT.  Can you believe I was actually wanting it to be HOT to test the limits of the jacket???  I wanted to ride in something awful to give the jacket a chance to shine.  And shine it did.  I'm always cold so that thermal/waterproof Hydratex liner stayed in until the temps started peaking above 65F.  I waited until the low 90s to really give it a go by comparison with my other "unsuitable" black jackets. 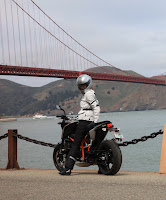 The Levante eschews the need for zipper vents, which are never accessible enough to open mid-ride anyways.  The entire jacket acts like one giant vent once the dual liner is removed, and there is well-placed cinching on the arms and the natural waist, ensuring a perfect or near perfect fit.  The liner is ridiculously easy for this klutz to remove, which hasn't always been the case. I struggle a bit with the Legacy GTX liner, but can honestly say the color-coded snaps and the fact that there are only 5 total with two zipped sections make me happy.  Quick and easy for someone like me who hates a liner challenge.  Easy to wash since no white jacket shouldn't be and because no white jackets stay white for long.  Just remove (easily) the CE-rated shoulder and elbow pads and pop the jacket into the washing machine on hand wash/gentle. Air dry.  The velcro wrist closures are stronger than that of the GTX and really do their job well. I have a short gauntlet on my Held Air Heros and I cover them by securing the jacket at the wrist. 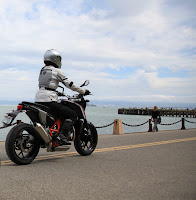 The cons - they are few and minor.  The rear flap pocket is advertised to fit your liner, which is the 2-in-1 thermal/waterproof Hydratex G-Liner.   Not happening.  Even got a second opinion from RevZilla.  I'd really like that to work out because I don't always want to take a tailbag or panniers with me on a ride, but occasionally want to shed a layer.  Interior pockets...once the liner is out, there is only one inside the jacket.  The exterior ones seem to hold paperwork but not much else so I would love to see one more pop in there inside the jacket (not thermal) itself. Elastic at waist of liner in lieu of a zip into the jacket may not have worked in their favor.  I'm long waisted and legged (hence my penchant for Rev'It's "long" pants options - a rarity in ladies gear).  The elastic on the interior liner would occasionally ride up above my pants and move around.  It is more of an annoyance than anything else.  Lastly, at this price point ($299) I wouldn't argue much about the lack of CE-approved back protection, but I will say that I highly recommend upgrading and a suggested manufacturer's improvement would be to design a universal back protector for all of the ladies' Rev'It jackets.

Overall, I'm really pleased with the jacket's performance in warm weather, and it fared very well on my ride through Paso Robles/San Miguel areas where temperatures peaked at around 97F.  I felt comfortable, got curious as to the outside temp, and the BMW said 97F.  Pretty sweet to not feel any discomfort at that temperature while you ride. 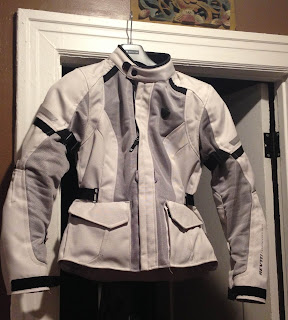 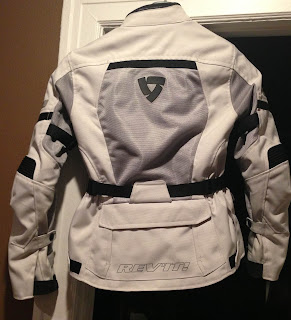 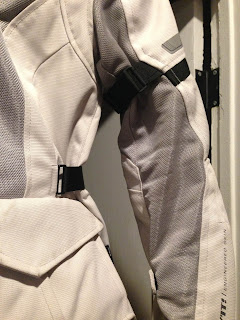 Cinching goodness at the natural waist and bicep.
Posted by Cristi Farrell at 12:00 PM